(There are still stocks of the original kit available with pear planking at an excellent price – this has limewood rather than pear laser cut  parts .)

The model kit of the Alert is depicted after her refit with twelve six-pounder guns and a full compliment of twelve half-pounder swivel guns, giving an ordnance total of twenty four guns.

The model kit is designed to be as accurate as is possible for a commercial kit in both scale and detail. To this end, all hull and deck fittings are bespoke with no ‘off the shelf’ fittings used.  Although the kit of Alert is as easy to build as we can make it, very basic woodworking skills (and patience) are still required.

The Version 2  kit, which now has all laser cutting done in-house, features:

Please Note – We have developed a laser etched deck for the Alert, which is laser cut and laser etched in 1mm limewood. The etched deck includes the correct planking arrangement and all treenails are included. If you would like this deck instead of the standard planking, please let us know when ordering, and we will swap the planks for the ready cut and etched deck. 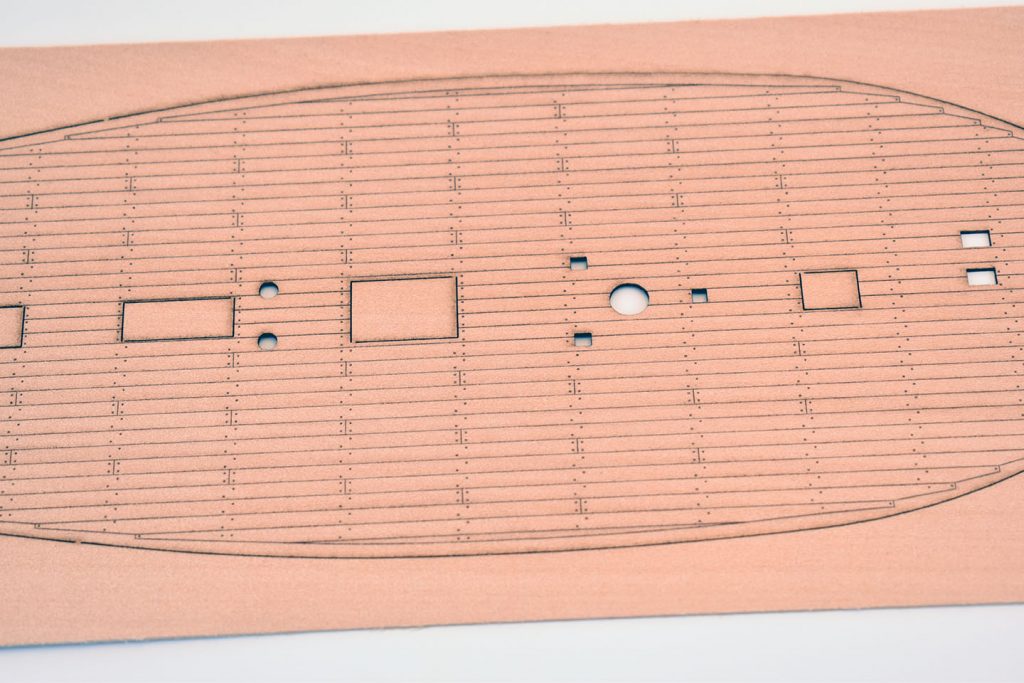 Excerpts from the manual

The Alert, built in Dover by Henry Ladd and launched on 24th June 1777, was the largest class of cutter in the Royal Navy. Alert originally carried ten four-pounder carriage guns and six to twelve half-pounder swivel guns. She was one of fifteen cutters built for the Royal navy between 1777 and 1778. Smaller cutters were often purchased or built by private yards and then purchased by the Navy, but Alert was purpose built from the keel up.

In February 1778, Alert docked at Plymouth for an overhaul, to which some alterations were made to her hull and the ten four pounder carriage guns were replaced with twelve six pounder guns, raising her broadside weight by 30%. The guns were changed because six-pounder shot was more commonly available and, of course, they were more effective.

Because of the increase in ordnance, the crew of the Alert was increased from sixty to eighty men, and recommissioned under a new commander, Lieutenant William George Fairfax. In May 1778, Fairfax was promoted to Commander and Alert was re-classed as a sloop to comply with Admiralty requirements. (Although always remained cutter rigged)

On 17th June 1778, the Alert, in company with the frigate Arethusa, spotted and intercepted the French frigate Belle Poule and the armed lugger Coureur, with the latter overhauled by the Alert and surrendered, returning to Spithead after the action with her prize. On 8th July of the same year, whilst on an independent deployment, searching for the enemy fleet, Alert was taken by surprise and captured by the French frigate Junon. Alert is reported as lost without trace on 15th December 1779.